I remember reading somewhere that scholars were examining Mark Twain's original manuscripts for "Tom Sawyer" or "Huckleberry Finn" or one of his other classics when they came across a strange sort of code at the bottom of each page. There was what appeared to be a random number written and circled on each one.

Before they had a chance to go all "Da Vinci Code" on the subject, one of the level-headed researchers realized that what those numbers reflected were the number of words on each page. Yes, even Mark Twain kept track of his word count.

I bring this up only because it is a subject near and dear to a writer's heart. It is the sole objective measurement of our output, our productivity. So it's no surprise that many of the tweets from writers that I follow have to do with their own word count, either great pride at the 3,000 word marathon they've just finished, or frustration at their measly 500 word output.

I've noticed too that one of the celebrities I follow on twitter, the wonderful and inventive creative force behind the films "Shawn of the Dead" and "Hot Fuzz" @simonpegg is apparently also working on a novel, and yes, he too has been tweeting his word counts.

I guess there's just no getting around it.

Speaking of word counts, things are going well on the pirate novel front. I was just shy of 24,000 words a few days ago when a series of events climaxed at the same time, leading me to stop right there, open a blank page, and smack dab in the middle of it type: BOOK II.

Not sure if that will be the structure when finished (though I absolutely can see it having four "Books," each about 25,000 words) but it was nice anyway to have "finished" one part of it. And if it only provides the psychological boost I need to continue on up the hill, then that's okay too.

Speaking of shipwrecks being unearthed by the shifting sands of Cape Cod, did you catch this this last weekend? From The Boston Globe: 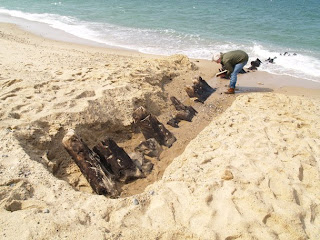 "The wreck of the British warship that Paul Revere slipped by on his legendary journey to Lexington in 1775 has resurfaced in the shifting sands of Cape Cod, and federal park officials are seizing the moment by having the wreck "digitally preserved," using three-dimensional imaging technology.

"We know the wreck is going to disappear again under the sand, and it may not resurface again in our lifetimes," said William P. Burke, the historian at the Cape Cod National Seashore, noting that the last time any part of the HMS Somerset III had been sighted was 37 years ago."

It was actually a similar event a few years ago, when an old schooner resurfaced at a place called Newcombe Hollow in Wellfleet, that inspired me to write my current wip. Here's the (very draft) scene where my protagonist comes across his wreck:

As their game progressed along the beach, Chris reared back and threw it over a tall dune. After watching it fly, the dog bounded up and over to retrieve it. Chris followed. Halfway up, he began to hear excited barks and yelps from the other side. Curious, he moved faster, and when he reached the top and looked down, it took a few moments for him to understand exactly what it was he was looking at.

On the beach below the dune, like the exposed ribs of an excavated dinosaur, thick black beams protruded from the sand. Though mostly buried, the part that was visible was about fifty feet long from end-to-end. Dismissing what he at first thought might be the skeletal remains of a whale, Chris crept down to get a closer look at what he now understood was the remains of the ancient shipwreck.

Of course by now, no doubt, there's lots of other writers out there maybe inspired similarly. Who doesn't think it's cool when a shipwreck resurfaces, and what writer of fiction with any interest in such things wouldn't have his appetite whetted to explore it? Can't help but wonder if maybe now, I'm in a race with a dozen other writers to get this thing out there first.

Could go either way.

On that subject, I finally renamed the working document "Pirate Novel" to its new working title, "Swash." I like it, though it remains to be seen just how much swashbuckling there will be. I may just have to throw some in there to justify the title! And come to think of it, maybe that's not such a bad thing.

In other news, if you get a minute, a hilarious and telling clip from a recent "Colbert Report" makes clear in no uncertain terms on which side he comes down in the copyright debate. Check it out here.

There's an interesting article in today's Globe that's either heartening or depressing (I'm not sure yet) of the trail the book "Tinkers" blazed before this week winning the Pulitzer Prize in fiction. You can check that out here.

Finally, I made a short story that had otherwise been gathering dust available for free on Smashwords. It's a (hopefully) humorous tale of an old school private investigator who stumbles into perhaps his strangest case yet. You can grab it here.

Enjoy! Or not. Your choice.

And happy writing!
Posted by Brendan P. Myers at 8:31 AM

Did you like my pirates? Oh, how they scampered and waved their swords : )

As for word counts, I obsess over mine like everybody else. Then, when I do good (count wise) I worry that the writing was bad. This is why writers drink.

Production values were out of this world. Better dressed than my pirates, though. Mine are stuck with whatever they can find in the Goodwill bin!

And it's funny, you, me, Barry, and Simon Pegg, were all in the 20,000 range when I started thinking about this. Course Simon put in 3,000 yesterday, the bastard. But the race is on!

Yeah, I'm a word count junkie lately. It's what I do. I need those little goals to make the big goal not so scary.

Agreed, Aaron. But never realized til you mentioned it just how scary that big goal is.

hey uncle bren its me zachary love you

Hey, Zac! Hopefully you're dad told you I got your messages. I love you too!