I’m telling this from memory, so no doubt some of the details are wrong. But the story goes that sometime in the late 50s, early 60s, the up-and-coming artist Roy Lichtenstein was in the New York Gallery that represented him, having brought in some new paintings to show the gallery owner.

In the vanguard of the then revolutionary “Pop Art” movement, Lichtenstein was best known for his realistic renderings of comic book scenes and characters writ large on the canvas, capturing the essence of what Pop meant, and that is, that anything can be art. Anything at all. Even comic books. 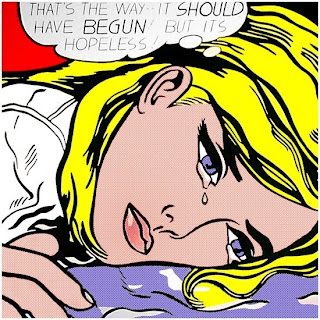 The legend goes that while Lichtenstein and the gallery owner’s backs were turned as they perused his new paintings, they heard a sing-song voice from behind say, “I draw pictures like that.”

Turning, they saw a skinny, funny-looking, wisp of a kid, with pale skin and white-blonde hair and glasses, clutching his own drawings beneath an arm. He had come to the gallery that day without an appointment to show the owner his own stuff, to see if there was any interest.

Of course, the waif-like thing that entered the gallery that day was Andy Warhol, and while Lichtenstein went on to become a world-renowned painter of great acclaim, Warhol went on to change the world. 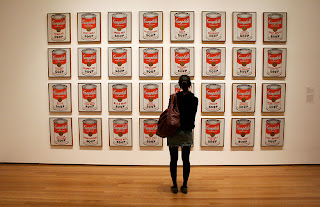 I guess the story stuck with me for a number of reasons. True or not, it’s a wonderful remembrance of the vibrant art scene in New York City in those days, as the grand masters of Abstract Expressionism gave way to the young turks of Pop; the baton passing from de Kooning, Pollack, and Rothko, to Rauschenberg, Warhol, Stella, and the rest.

Another reason it stuck with me is, it’s a wonderful example of Woody Allen’s truism that 80% of success in life is just showing up, and that day, Andy Warhol showed up.

And so, in the spirit of Warhol, if you'll forgive the segue into blatant commercialism (Andy would) . . . I write books like that.

If you’re looking for a (hopefully) humorous cross between Don Quixote, Philip Marlowe, and Ignatius J. Reilly, The Dick Londergan Chronicles (and Hell City in particular) might be for you.

If you enjoy Dan Simmons, Stephen King, or Robert R. McCammon, then the Applewood duo, 21C and Other Sordid Tales, Sumner Gardens, or Adamson’s Rock and Other Stories might be right up your alley.

If you’re looking for Christopher Moore crossed with Willy Wonka (and who isn’t?) then my pirate adventure Swash! might scratch that itch.

Of course, I recognize I’m not even half as good as any of those folks. But I am getting better. And I do take heart that most folks who read them seem to like them (they aren’t coming to my house or my review sections with pitchforks and torches, anyway.)

So please, if you haven’t read them, why not give them a shot? After all, you’ve got nothing to lose. The Kindle does have a refund button.

As for me? I'm just going to carry on.

(PS: You have any interest at all in the New York art scene of the late fifties and beyond, you can't go wrong starting with Calvin Tompkins book, "Off the Wall." Sparked my own interest in art, in all its varied forms.)
Posted by Brendan P. Myers at 8:28 AM