Cool! Had nuthin to write about anyway . . .

When I can't think of anything to write about or have nothing new to report, I tend to shy away from this place as well as the blogs of others I follow.

Fortunately, I took a quick peek at Aaron Polson's blog and it seems there's this movie meme/survey thing floating around. Cool Beans!

1. Name a movie that you have seen more than 10 times:

Loads and loads, but what comes to mind immediately is The Poseidon Adventure when I was a kid and Jurassic Park as an adult.

2. Name a movie that you’ve seen multiple times in the theater:

My family is bored with the story of that day I sat through Tommy twice, only to leave the theater and discover my bike had been stolen . . .

3. Name an actor that would make you more inclined to see a movie:

I don't go to the movies that often, but when I see Stanley Tucci is in a flick, I know it won't be a waste of time.

4. Name an actor that would make you less likely to see a movie:

Mercy. Hate to say it (given his previous brilliance) but I'm gonna go with Steve Martin, who only seems to make movies these days to support his art collection. He doesn't care about them, so why should I?

5. Name a movie that you can and do quote from:

There are a bunch. Spinal Tap and The Great Race come to mind. But only one person gets my Great Race references.

6. Name a movie musical that you know all of the lyrics to all of the songs:

Like Aaron, Jesus Christ Superstar. And The Music Man. And South Pacific. And Oklahoma. And . . . about a hundred others. (Drama fag in high school. I ain't gonna apologize for it.)

7. Name a movie that you have been known to sing along with:

Strangely enough, given my previous answer, can't think of one.

8. Name a movie that you would recommend everyone see:

Great question. In my current mood, if I have to pick just one, I'd go with The Bridge on the River Kwai. Recently made sure my nephew's film education was complete by watching it.

Colonel Saito: Do you know what will happen to me if the bridge is not ready in time?

Colonel Nicholson: I haven't the foggiest.

Colonel Saito: I'll have to kill myself. What would you do if you were me?

Colonel Nicholson: I suppose if I were you . . . I'd have to kill myself.

10. Name an actor that launched his/her entertainment career in another medium but who has surprised you with his/her acting chops:

Gonna go outside the box here with Joan Jett's performance in Light of Day. I think it might have been her only acting performance but she was awesome, and held her own against Gena Rowlands. Very underrated film.

12. Name a movie that you keep meaning to see but just haven’t yet gotten around to it:

Was with family yesterday who want me to see Tropic Thunder. It's on the list.

Walked out of the last few minutes of Malcolm X. Enough already.

Shoulda walked out of The Departed. One of the worst movies I ever saw.

14. Name a movie that made you cry in the theater:

I confess to getting the sniffles at the end of Slumdog Millionaire. Sue me.

15. What’s the last movie you saw in the theater?

Saw Public Enemies last week. They had everything assembled to make a great movie and missed the mark big time.

16. What’s your favorite/preferred genre of movie?

17. What’s the first movie you remember seeing in the theater?

Hmmm. I simply have no recollection. Didn't go to the movies with my family as a kid, so it was probably something like Island of the Blue Dolphins on a field trip with my class in the first or second grade.

18. What movie do you wish you had never seen?

The aforementioned The Departed. Total waste of time.

19. What is the weirdest movie you enjoyed?

I don't wanna say "enjoyed" but Elephant was phenomenal.

20. What is the scariest movie you’ve seen?

It's probably The Exorcist, but my brother grabbed me just as Carrie's hand came out of the grave, so . . .

21. What is the funniest movie you’ve seen?

Hard to pick just one, but the movie that makes me laugh just by thinking about it is Sleeper. 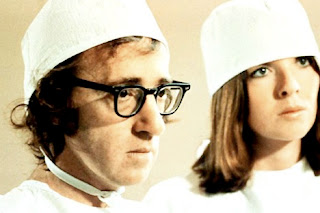 "YES, I BELIEVE THAT WE SHOULD GO AHEAD WITH THE CLONING."
Posted by Brendan P. Myers at 7:27 PM

The Bridge on the River Kwai is a fantastic choice. The problem with most movies people should see? The folks who should see them don't have the patience.

Take my high school students for example. They collectively have the patience of a couple of gnats. They wouldn't sit down for Kwai.

Oh, what they are missing...

Though I'm certain you know this as well, what remains the most fascinating thing about "The Bridge on the River Kwai" for me has nothing to do with the movie.

Not surprised to hear about your students. Given our 140-character, text-based world, I fear something evolutionary may occur over the course of only a few generations that will forever alter humans ability to focus for more than a few seconds.

You sin dear sir! Steve Martin's past work alone means you must... put up with whatever movies he's in now. You must suffer through and enjoy him! Respect!

It's a wonder you can talk, what with your tongue pressed so firmly in your cheek!