Will Write for Food

Had a nice surprise waiting in my mailbox over the weekend, a contract from Blue Mountain Arts for a 600-word Irish-centric anecdote I sent them a few months ago.

Best known for their greeting cards, I learned from this process that Blue Mountain also publishes themed anthologies of the kind you find in gift shops and Hallmark stores and the like.

The guidelines were that the story had to center on the Irish or the Irish-American experience, and had to end with a pithy Irish saying that summed up the content of the story.

I stumbled across this one with a simple "anthology submissions" Google search and found some blogs reporting Blue Mountain was looking for Irish-themed anecdotes for a tentative anthology titled Irish Expressions. Curiously (or maybe not so curiously, in these times) the bloggers found the actual submissions call on a Craigslist posting.

Aside from (perhaps obviously) having Irish American roots, I had the tremendous good fortune of spending one summer in college with a friend and his family who owned a home on the southwestern coast of Ireland, in County Kerry, the land of my own ancestors.

I even met the Prime Minister: 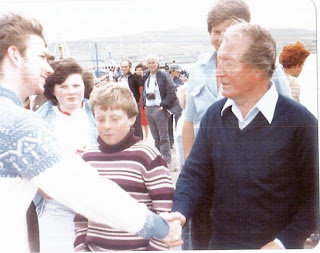 (It is with some shame I recall I never really thanked my friend and his family enough for this life-changing experience. So, thanks again, guys! You know who you are. The trip and your hospitality remain one of the greatest experiences of my life.)

The anecdote I elected to tell comes from this trip to Ireland, where I literally bumped into a long lost relative.

Before writing it, I logged onto Duotrope and found Blue Mountain listed as "DNR" which means "Do Not Recommend." Further research revealed that the reason for this was they do not post their standard contract on their website, an automatic no-no for Duotrope.

A quick trip to "Predators and Editors" also cautioned against Blue Mountain, noting something about contract terms that were unfair to the writer.

But the contract I received and happily signed seemed a straightforward enough anthology rights contract, and fifty bucks is fifty bucks. As long as the check clears . . . I'll be happy.
Posted by Brendan P. Myers at 8:17 AM

Congrats on the acceptance. Sounds like an interesting anthology. Makes me wonder how many decent markets are out there that are not recognized bt Duotrope.

Thanks, Jeremy. Duotrope and P&E both were both upfront about their reasons, which I appreciate and helped me know what to watch out for.