Years ago, an old boss turned me on to Nelson DeMille. He gave me a dog-eared copy of The Charm School and after that I was hooked. I quickly read all he had already published: The Talbot Odyssey, Cathedral, By the Rivers of Babylon, and The Gold Coast. After that, he became one of the authors whose books I bought as soon as they came out.

The gripping Spencerville followed, and The General's Daughter came next (a serviceable if somewhat pedestrian tale.) In the late nineties came The Lion's Game, one of the best books I ever read. I still remember the name of the Muslim terrorist who swore revenge on America and almost succeeded: Asaad Khalil.

When 9/11 happened, some called it a failure of imagination. Nobody in our intelligence community, they said, could imagine our enemies would commit a crime so heinous. But one of my first thoughts upon hearing this was: I can think of someone who could.

So one day, I'm on my lunch hour and haunting the late, lamented Avenue Victor Hugo bookstore on Newbury Street. I was way in the back where musty old Fawcett Gold Medals and other pulp fiction from the seventies and eighties were found, when a thin book caught my eye. It was called The Terrorists by someone named Nelson DeMille. But that wasn't possible, I thought. I had read everything he had ever written.

I grabbed the book and read it. It was a hard-boiled tale of a New York City cop named Joe Ryker who was doing battle against a group of domestic terrorists a la The Weathermen. They were setting bombs throughout the city and causing other mayhem, and had also kidnapped the son of a wealthy industrialist.

But it was the opening scene that convinced me this was the very same Nelson DeMille. Someone has brought a scimitar onto the New York City subway and begins running through the car stabbing and killing people with it. He is a Muslim terrorist who all but chants "Death to America." In the seventies, mind you.

After finishing the book, I did some research and learned that DeMille wrote a series of books in the seventies under the pseudonym Jack Cannon (and isn't that a hard-boiled name?) featuring this New York City detective. 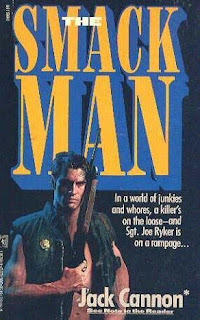 I stumbled across an interview with DeMille where he was asked about these books, specifically why he had chosen to use a pseudonym (my copy must have been published after his initial success, the publishers attempting to glom onto it.) He answered:

"I knew someday I wanted to write better books."

For some reason, that comment has always stuck with me and I've been thinking about it a lot lately, for a few different reasons.

I guess the first thing is, it acknowledges that novel-writing is something you invariably get better at. No matter how good you think your first novel is, the second one is bound to be better. And if not the second one, then absolutely the third one will be better. And the fourth. I find that truism somewhat heartening.

I suppose another reason I've been thinking about his comment lately is that the publishing industry has changed so much. Were he to follow the same career path today, DeMille would not have found anyone to publish these first, let's face it, "practice" books. They've all gone away. 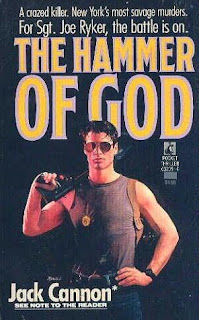 These early books of DeMille's were also not much more than 50,000 words, the standard length for pulp action tales of the time. First-time novelists can't get anything like that published today. The odds are quite slim, anyway.

So, with my own first attempt at a thriller out there (with my own name on it, no less!), with people actually buying and reading it and not showing up at its Amazon page with torches and pitchforks (though I know it has its flaws: the characters are somewhat cartoonish, the lines of good and evil are too clearly drawn, it's barely 50,000 words) . . . here's to writing better books!
Posted by Brendan P. Myers at 7:47 AM

I have often thought about creating a pseudonym. But I am far too competitive and would end up not liking (part of) myself very much.

both those covers made me smile.

someday, i want to have covers with macho men with guns on them.

Barry: As usual, even your informal musings make a very good plot!

Samantha: Hilarious. I envision you becoming so successful that you demand such a thing, regardless of the story!