Random musings for a Friday Afternoon

First of all, thanks to everyone who has purchased "Applewood." It means a lot. Thanks as well to all those participating in the Goodreads giveaway (link to your left.) As of this writing, 448 people have signed up to win one of the two copies available, with plenty of time left for more to get in on the fun.

In addition, thanks to all the Goodreads folk who have added the book to their “to-be-read” shelves. I think that kind of buzz can really make a difference. If you're not yet a member of Goodreads, see last week’s post below for details about the giveaway itself.

In other news, I’ll be writing a guest post over at Patricia’s Vampire Notes blog, tentatively scheduled to run on June 21st. It's a first for me, writing a post for someone else's blog, and I'm finding it . . . hard to write. Not sure why. I suppose it's because it's for an audience that doesn't know me yet.

In conjunction with that post, I’ll also be giving away another copy of the book, and the odds of winning there will no doubt be far better than the Goodreads giveaway, so stay tuned for details!

As an aside, I popped on over to Patricia's blog moments ago and saw that her latest post summarizes vampire releases for May, and she has again featured "Applewood." Can't thank her enough for the kindness.

Got my first Amazon review of “Applewood” this past weekend.

". . . an engaging atmospheric horror thriller that hooks the reader with the opening corpse and never slows down . . . the story line is fast-paced . . . Dugan is a unique protagonist . . ."

Click here to read it. I’m sincerely grateful to that reader as well. As a reminder to folks, good, bad, or indifferent, reviews help a lot.

Finishing up my reread of Dan Simmons “Children of the Night.” I read it when it first came out back in 1992 or so and am finding it interesting to read it again. Have pretty much the same opinion of it too. Keep an eye out for my upcoming review on Goodreads.

I'm heading down the home stretch of a tedious edit and rewrite of the sequel to "Applewood." It amazes me to think that when I finished the last edit, I thought it was all done. It was perfect! And then, to open it a few years later and see it needs so much work . . .

I find nothing as tiring as editing. Sleep comes very quickly the evenings of those days when I’ve done a few hours of it.

Speaking of that, I’m a few thousands words into the third episode of the "Applewood" saga. Just random notes and thoughts at this point, but the rest will come.

On another front, I created a new cover for "Hopetown": 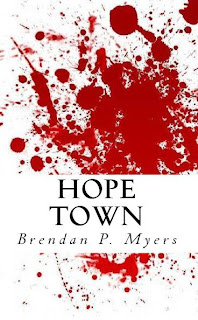 Always hated the one I threw together, though I always thought the birds were a nice touch. It's easy to forget that aside from my short story collection ("Adamson's Rock and Other Stories"), "Hopetown" remains my best reviewed work.

Question for other writers who also use Smashwords: Have your Barnes and Noble sales "frozen up"? I've sold or given away more than 1200 books over there in the past year, and then, a few months ago, it stopped cold. I'm still distributing there, the books are still available, and Barnes & Noble readers continue to rate them, but the number on the "Sales and Payment History" page hasn't budged. Doesn't make sense they'd just stop like that.

Have a good weekend everybody! Drive safely.

PS: To answer the question I'm getting the most: