Dick Londergan is a private detective from the old school, the kind of guy who likes his women leggy, his scotch neat, and his coffee black. When summoned to Telegraph Hill to investigate a murder, he finds himself thrust into a mystery so deep, even his old school methods may not be enough to solve it.

Among the sinister questions confronting him: Why was his town suddenly so popular with racket boys and hoodlums? For what nefarious purpose had the two biggest criminal bosses in town set aside their differences? Who was the blonde English chef berating his cooking skills? And why was Londergan himself constantly being hounded by television cameras?

These and other questions will (mostly) be answered in this comic novella, an homage to the iconic private detectives of the past, about a guy who finds himself lost in a world where lines of reality and fantasy blur, one in which the greatest mystery of all might be: Who is Dick Londergan? 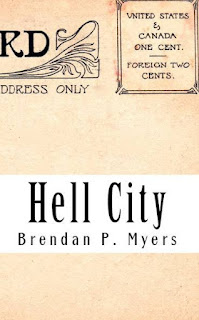 Hell City (The Dick Londergan Chronicles) - available now in ebook format for Kindle from Amazon.Com, and coming soon in paperback and other formats.
Posted by Brendan P. Myers at 6:54 AM