Even more from "Hell City"

This was bad, I knew. As bad as it gets. Shoving the papers aside, I started hearing music in my head and felt the sudden onset of a headache. With shaking hands, I removed the keys from my pocket and unlocked my lower desk drawer. I desperately needed to think.

Now, before we go any further – and I know lots of people think it’s hooey – but hear me out on this and try to keep an open mind. That’s all I ask.

Did you ever hear a song in your head and then turn on the radio only to find that song playing? Have you ever heard voices in your head? Of course you have. We all have. It’s why most of us can’t think straight, why some people turn to whiskey and dope and worse just to get through the day.

The reason this happens is there are millions of waves floating through the air at any given time. In fact, even as you read this, at this very second, being blasted into your brain from every direction are radio stations broadcasting at 50,000 watts, television stations blasting out megahertz, and cellular telephones beaming their signals directly into your brain.

As if that ain’t enough, those aren’t the only waves seeping into your mind. No, like some kind of cosmic background noise, radio waves come into your head from every corner of the universe. Ever turn on the TV after the station stopped broadcasting for the day and seen that static? Those are radio waves my friend, ones that date all the way back to the Big Bang, to the very beginning of the universe.

That’s all going through your brain right now. So doesn’t it just make sense to use some sort of barrier to protect your brain from these waves, even if only for a short time, so a man might do some thinking? Of course it does. What’s more, you know that it does.

I don’t know where you keep yours, but I keep mine in my lower bottom drawer. It’s an old lampshade I found in the back alley that I wrapped up tight in Reynolds Wrap. I got some loose foil draped along the bottom to protect against any waves coming up from the ground.

While it ain’t totally sealed – a man has to breathe – I figure it keeps out more than ninety percent of the stuff, giving me peace of mind, if only for a while. After taking one last swig of coffee, I donned my hat. Only after wrapping the loose foil tightly around my neck did I relax enough to sit back and think. 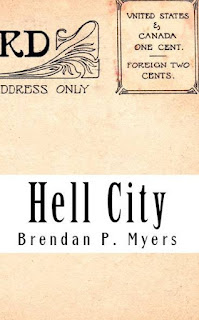 "Hell City" now available in both Kindle and paperback format from Amazon.Com and for the Nook from Barnes and Noble.
Posted by Brendan P. Myers at 11:20 AM