On the occasional pleasant surprise

Got curious this morning to see if there is any way to determine how well your books are doing in the iBookstore. Smashwords (who distribute my books there) only reports sales and downloads once a month, so it's hard to say if you have any momentum at all.

I'm mostly curious about it because I've essentially given up on Amazon. In fact, I can't get arrested on Amazon. Like lots of other writers who opted out of their KDP Select program, my once burgeoning Amazon sales essentially stopped last March, and by "stopped" I mean, almost quite literally, no sales at all. Months can go by between a single Amazon sale.

But then, it seems Amazon is more interested now not in selling books, but in giving them away, to sell more Kindles (which is weird, because they lose money on every Kindle sale.) And, if you're a writer who is not giving your books away, Amazon (I suspect) buries you.

(As an aside, Amazon introduced a new "Author Ranking" system which tells you exactly where you fit in the Amazon pecking order. Because I no longer sell books on Amazon, you can find me down in the 400,000's somewhere. I fully expect some day, they are going to use that metric to amputate those of us below 150,000 - 200,000, and my Amazon problems will be solved forever. But I digress . . .)

Another disheartening thing is, when I search for myself on Barnes and Noble, there's a whole lotta 3-stars staring back, mostly on books I've offered for free (whadya WANT for free?) And 3-star reviews aren't going to sell a lot of books, are they?

And yet, I do sell an occasional book at both Barnes and Noble and the iBookstore. In fact, for the past six months or so, I sell more books at the iBookstore than anywhere else.

So anyway, in an effort to determine if I could find any information at all about my books, I finally installed the app on my iPad and went into iTunes and saw . . . this (click to embiggen): 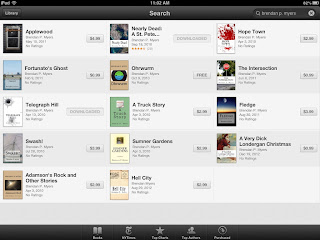 28 people have rated my St. Pete-centric zombie short "Nearly Dead" four out of five stars. 28 people! The most reviews I've ever gotten on anything is on "A Truck Story" with five, and two of those were cajoled by me, and a third (I happen to know, though sans cajoling) was from an old friend.

While we're on the subject, I no longer ask people to leave reviews for my work. But books without reviews tend not to sell too many copies. So if you've ever taken the time to leave an honest review on one of mine, I appreciate it. And if you haven't, I'd appreciate it if you would.

At any rate, thanks for reading my rant. Just needed to share. Maybe I'm a four-star writer after all! And remember, zombie folks are hard to please . . .
Posted by Brendan P. Myers at 11:48 AM

Greetings Brendan! I'm so glad I found your blog. I love your sense of humor and that you write about vampires. I too am a writer and I LOVE reading. I noticed that you live in sunny Florida too. I live in Pinellas County. Anyway, I'd like to read one of your books and chat with you. I know how busy you are and I'm hoping that you can spare some time about your expertise in publishing. Please contact me either way. My email is yurinohana777 at yahoo dot com. Looking forward to hearing from you!

Thanks so much for both the visit and the kind comments, though I fear you credit me too much for having any "expertise" in publishing at all. I've learned, in fact, that publishing is easy. It's the selling that's hard! But I wish you the best of luck in all your writing endeavors.