The Cover of the Rolling Stone

With the “outrage” over this month’s Rolling Stone cover featuring the alleged Boston Marathon bomber still running high this morning, I thought I’d chime in with my two cents. I’ll begin by saying that I’m not outraged by it at all. 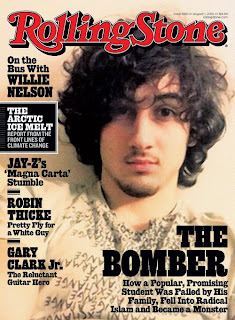 That said, I don’t think there’s any single reason why people are outraged over it. I think part of it is that some believe (quite wrongly) that Rolling Stone is primarily a music and pop culture magazine, when in the past few years it has provided some of the best and most provocative investigative reporting anywhere.

For example, Matt Taibbi’s exposures of Wall Street’s excesses were must reads. The late Michael Hastings’ profile of General Stanley McChrystal’s frathouse atmosphere in Afghanistan got the man fired. So I suspect some people believe (again, wrongly) that Rolling Stone is doing something here that they don’t often do, that is, deeply investigating a serious topic.

I think another part of it is that the cover of the Rolling Stone is, much like the cover of Time, iconic in our society. Heck, there’s even a song about it. Who wouldn’t want to be on the cover of either one of them? For something less atrocious, certainly.

I also think part of it is the knowledge that in certain bizarre, mostly tween, corners of the Internet, a “Free Jahar” movement has sprouted up since pretty much the day his photo was released to the media. And if you’ve followed this craziness at all (just type “freejahar” into your twitter search bar to enter this twilight zone) you know that much of it was and is being egged on by a former classmate of the alleged bomber, whose motive appears to be selling a hip-hop mixtape. You couldn't make it up.

Which brings me to my final point, that is that people seem to think that Rolling Stone, by choosing the picture that they did, are giving him the “Rock Star” treatment, when in fact (and I’ve jokingly tweeted this over the past few days) it would appear that Mr. Tsarnaev simply doesn’t take a bad picture.

Seriously. Have you seen a “bad” picture of him? Do a Google image search. See him in his tuxedo at the prom. See him on Graduation Day with a red carnation and his arm around a classmate. Always with the tousled hair, the laconic stare, and the sleepy (no doubt, stoned) eyes. Had Rolling Stone chosen either of those pictures, they would have been just as lambasted.

And even last evening, when a Boston Police source released photos of him from his capture, apparently with the intent of making this “monster” look more monstrous, among the pictures they gave us was this: 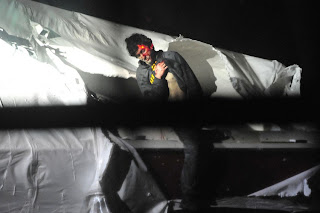 And my first thought upon seeing it was, “Dear Lord. This is not going to be helpful. He looks like Christ.” The blood flowing down his head (from a crown of thorns, maybe?) Lifting his shirt to show the police he was unarmed (or maybe, to show a doubting Thomas he does indeed have a spear wound?)

No, I'm afraid what we have here is a guy who simply does not take a bad picture. In fact, I wish Seinfeld were still on the air to give us the correct name for this kind of meme (“He’s a low talker.” “She has man hands!” “He’s an IPG -- an incredibly photogenic guy!”) Even bad pictures of him look better than Bruce did on the cover of “Darkness”; and yet, none of it makes him any less a scumbag murdering terrorist.

So yes, I do understand why the good people of Boston don’t want this guy staring at them from newsstands every day for a month. I'll say too that after having read the article, my major disappointment is that there really isn’t anything new in there that I didn’t already know.

In fact, it might have been far more interesting for Rolling Stone to do an in-depth piece on the “truther” tween movement that has sprouted up to support him, filled (apparently) with mostly young girls who have never met "Jahar," and who know him only by . . . his pictures.

Update: Pleased to see the man himself, Rolling Stone writer Matt Taibbi, chime in on the "controversy." Pleased too to see him echo some of my own feelings. Confess I was nervous about this one. Link:

Politics: Explaining the Rolling Stone Cover, by a Boston Native

However, I will dispute one of his statements, that, "What happens to the magazine and its reputation is really of little consequence in the grand scheme of things." He couldn't be more wrong. It matters. A lot.