The calm before the storm

Not much to say in this one. Just blowing off some nervous energy in advance of tomorrow. I won't mind if you stop reading right here.

Well, tomorrow's the big day, the release of my new zombies take over New York City novel, "Sincerely Dead." All systems are go. The files are loaded up at Smashwords and Amazon. Smashwords will automatically release the ebook to iTunes and Barnes and Noble tomorrow (but of course, you can pre-order it now! Click the big book on the right.) Because Amazon doesn't allow us peons to pre-release, I'll pull the trigger there later on this afternoon, and the Kindle version will probably be available sometime late this evening.

Funny, I was working on edits as late as yesterday afternoon, when I realized I was doing more harm than good. So those parts you don't like probably happened then. It actually got to the point in proofing the paperback I had to ignore the text, else I'd see something else I wanted to change.

But nothing's perfect, right? And what's that they say? Don't let perfection be the enemy of the good? (If it's indeed good, that is.) At any rate, toward the end, it was just taking out and putting back in commas, changing the order of words, etc. I think it might be just about ready.

As noted previously, I'm trying to do everything within my (very limited) power to make this one a success. Tweeting and Facebooking (and blogging) the hell out of it. Doing a Goodreads giveaway (if you're a Goodreads member, click the link over there on the right and enter the drawing!) Tomorrow morning, I'll post something about it over at Kindleboards.

I've spent lots of time in Caliber and Sigil the past few days and weeks making the ebook as pretty as I can. For what it's worth, I think it came out pretty good. I've also been prettying up some of my older works ("Swash!" in particular -- I'll never understand why folks didn't buy that one) in the hopes that if folks like this one, they'll poke around those as well.

It'll take a few days for the paperback to become available at Amazon, however I pulled the trigger at Createspace this morning, so if folks don't want to wait for Amazon, you can buy it right now directly from Createspace (the printer) if you want to by  clicking this link.

In terms of the book itself, I think it might be the most "me" book I've yet written (now, whether that's a good thing or not remains to be seen . . .) Honestly, I have no idea if it's any good. I've stopped even soliciting beta readers. I didn't hear back from most of them the last time around, and I don't blame them. I do think this one might be pretty good, though. At least, I'm fairly sure there's a good story in there somewhere, even if it might have taken someone more talented than me to find it.

Something else to be nervous about: I was tempted almost to the last minute to add a disclaimer, something like, "This is a New York City of my imagination. All mistakes are on purpose." I think one of the reasons it took so long for me to write this (a natural sequel to "Nearly Dead") is that I just don't know New York City as well as I do St. Pete or Boston (obviously). Even now, I'm nervous that I have characters looking west to the East River, or east to the Hudson, or something like that. But what's done is done.

Anyway and in conclusion, if it sounds like a "Poseidon Adventure"-style tale of desperate survivors attempting to escape an impossible situation (except instead of an ocean liner it's New York City and oh, there are zombies) this one might just be up your alley.

Until tomorrow. And as always, thanks for reading. 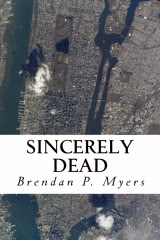