In Praise of Philip Wylie

A number of years ago, in conjunction with the transition to the new millennium, Modern Library came out with a list of the Hundred Best Novels of the 20th Century. Of course, any list like that is bound to be controversial, and this one certainly was. What I remember most about it was that a long-held pet theory of mine at least now had (perhaps!) some basis in truth, that is that 1934 was the greatest year for American literature in the past century (and maybe, ever?)

No fewer than seven novels published in 1934 ended up being honored on the Modern Library list, and coincidentally or not, a number of those books also happen to be among my all-time favorites, including Tender is the Night by F. Scott Fitzgerald (no. 28), Appointment in Samarra by John O’Hara (no. 22), and The Postman Always Rings Twice by James M. Cain (no. 98).

Other books published in 1934 that the editors of Modern Library deemed worthy of being called “the best” of the past century were I, Claudius by Robert Graves (no. 14), A Handful of Dust by Evelyn Waugh (no. 34), and Tropic of Cancer by Henry Miller (no. 50).

Now, it would take someone a lot smarter than me to posit a theory about what it was about 1934 that sparked such genius. The country was in the fifth year of the Great Depression. We were between two great world wars. It also happened to be the golden age of magazine fiction, providing lots of outlets for young writers to sharpen their skills before coming out with their masterworks. Who knows?

But even before the list came out, I found it curious that so many of my favorite books were published that year, and it was only later I'd discover another author who published a book that year that deserves every bit the acclaim of the ones mentioned on the Modern Library list, and that book was Finnley Wren by a writer named Philip Wylie. 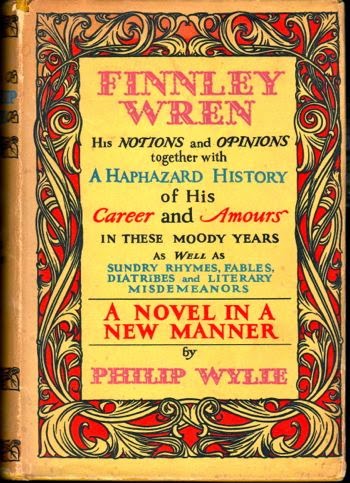 The first time I remember even hearing the name Philip Wylie was when the University of Nebraska put out their wonderful edition of the science fiction classic When Worlds Collide (which also contains its sequel, After Worlds Collide). I stumbled upon it in a Barnes and Noble one day, drawn to the no doubt excellent cover, and decided to give it a shot.

The plot of the book (and later movie) is probably well-known by now. Earth finds itself in the path of two rogue planets, one of them on a collision course with Earth. Some scientists believe the other planet might just be hospitable enough to allow human habitation, the problem being how to get from here to there. Though both the language and the science in the book are dated, there's a lot about it that still rings true.

What most delighted me about stumbling upon this book was that it introduced me to Philip Wylie, and after reading it (as is my wont when I discover a new author) I hunted down most everything else by him I could find. Seemingly almost forgotten today, Wylie was a working writer for more than half a century, who distinguished himself in a number of genres, including science fiction, crime, and social criticism.

Among many other things, he wrote the screenplay to the Claude Rains classic, The Invisible Man. His 1930 novel Gladiator is often credited with inspiring the character of Superman. The aforementioned 1934 novel Finnley Wren is a tour de force and an English language masterpiece. Later, during the Cold War, Wylie wrote a number of books featuring a post-nuclear war America, most notably in Tomorrow! Wylie himself became personally involved in Civil Defense initiatives.

Not content with simply writing fiction in a variety of genres, in the nineteen-forties Wylie began delving into social criticism with his books Generation of Vipers and An Essay on Morals. His social criticism extended into the sixties with, among his last published works, The Magic Animal, the animal in question of course, being man.

But what I find to be the most approachable Wylie are the "Crunch and Des" stories he wrote, mostly for the Saturday Evening Post, that you can now find in a number of modern editions. Telling the tales of a pair of commercial fishermen in Florida, they are guaranteed to bring a smile.

So, in a nutshell, if you're ever at a yard sale and see a dog-eared and yellowing book by a guy named Philip Wylie, pick it up. You'll be glad you did.