Writing the promised new Londergan short. But more on that later.

As noted in this space a few weeks ago, I enrolled all my ebooks into Amazon’s KDP Select program, meaning they are currently only available in ebook format at Amazon for the Kindle (as always, most are available in paperback format and you should buy one.)

Funny thing is, I hardly ever sold books at Amazon, but did indeed sell them at other outlets, most notably the Apple iTunes store and Barnes and Noble. But it wasn’t a lot, and I figured if the government is going to allow Amazon hegemony in the ebook marketplace, who am I to argue?

And whaddya know, after a few frustrating weeks, there are signs of life. In fact, I’ve sold more books at Amazon this month (all currently at 99 cents, by the way, nudge nudge, wink wink) than I have in years. I even had my first Amazon borrow. I’ve long half-joked I was embedded in Amazon’s “pay this author no mind” algorithm, because no matter what I did, I couldn’t sell books there. Now that I’m exclusive to them, I am. Hmm . . .

Anyway, my contract runs out in early August, and if things continue, I may just remain there and try to grow sales. I’ve had a couple of wonderful reviews lately as well, most notably on my pirate adventure Swash! for which I’m very grateful. To be honest, I’m my own worst critic, and even I think that book’s pretty damn good.

Another thing I’ve done is removed pretty much all the Dick Londergan’s from my catalog, going so far as unpublishing the Londergan novel, Hell City. Much as I like and appreciate my befuddled hard-boiled P.I. (and lots of folks at Apple and Barnes and Noble seemed to like him too!) he has, for whatever reason, never gained traction at Amazon. Maybe because they’re so short, or so different from my other offerings. In hindsight, I should have used a pseudonym. Lesson learned.

However, after unpublishing them all, I did go back and republish The Ghost and Mr. Londergan because well, there IS a ghost in it, which is kind of in keeping with the rest of my stuff. Also, it’s a novelette of around 13,000 words, so at 99 cents for a few hours entertainment, it’s still a bargain. That too received a wonderful review recently, so maybe, just maybe, things are looking up.

In any event, I did get started on that new Londergan, got a ways in, when somehow, I began work on another novel. I don't even remember why or how or when I segued into it. But it's been going on a few weeks now, and I’d say I’m more than halfway into it and the writing is going well. It has some of the whimsy of Swash! as well as elements of horror from some of my other works.

And for the first time since maybe I wrote Swash!, I’m actually enjoying the writing process and discovering along the way what's going to happen next, because as always, I’m writing blind, having no idea where things are going till we get there.

In other news, I was delighted to do an Amazon search recently and find the fictional town of Grantham from my vampire novel Applewood merited a mention in the recently published Horror Guide to Massachusetts, a compendium of locations both fictional and non-fictional throughout Massachusetts where horror stories were set. Check it out! 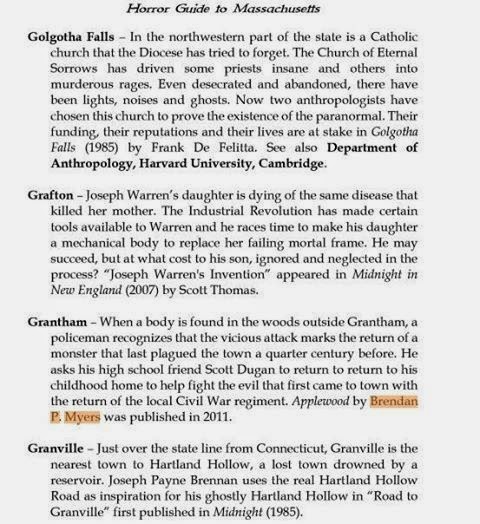 Funny, things like this always seem to happen at just the right time, when I’m feeling down or about to throw in the towel. I’ll sell another book (even one copy) or find someone left a kind review or a nice comment on Facebook. So maybe there is hope, as the last line (or something like it) from my lone attempt at a thriller Hope Town (and even THAT had a kind Amazon review left recently, though she hated the editor. Me too, reviewer. Me too.) put it:

“Above all else, Parker still held out hope.”

Happy reading! And as always, thanks for stopping by.
Posted by Brendan P. Myers at 6:14 PM