The Space of Life Between

It's morning again in America . . . but not for Scott Dugan. 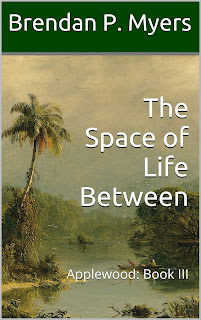 I'm delighted to announce the next volume in the Applewood saga is now available for pre-order from Amazon.Com. Titled The Space of Life Between, the story goes like this:

Three years have passed since young vampire Scott Dugan and his uncle found refuge in Mexico. They thought they had put their troubled pasts behind them, until the day a familiar face shows up to ensnare Dugan in a scheme that will transport him to the killing fields of war torn Central America and beyond.

And when Dugan learns the truth about their mission, he must decide whether he owes his allegiance to the human race he was once part of, or to his newfound self.

For those who haven't read them, for a limited time, the price of the first volume Applewood has been reduced to just 99 cents, and the follow-up Fledge to just $2.99. As always, if you're a member of Kindle Unlimited, you can read any of my books for FREE!

If you're unfamiliar with the Applewood saga, it tells the tale of a boy named Scott Dugan, who along with his friends battle a vampire outbreak in their small Massachusetts town. The sequel Fledge follows Dugan as he and his uncle go on the run from shadowy government forces who want Dugan for their own nefarious purposes.

This new entry, The Space of Life Between, picks up where Fledge left off, with Dugan and his uncle refugees in Mexico. I won't say too much more about it, but there are plane crashes and earthquakes and Marxist revolutions, along with surprise visits from old friends, and I hope you'll find it a hell of a lot of fun.

(You don't need to have read any of the previous volumes to enjoy this one. But I hope you will!)

To pre-order the book, click any of the links above to go to my Amazon page, or click this link, or the book cover on the right. Release date for both the Kindle version and the paperback are May 18th, however I'll release it early if there's enough interest . . . and it's done!

And don't forget to check out my other books, such as my most recent book The Mound or my pirate adventure Swash! Most folks seem to like them too!

Thanks, as always, for taking a peek at my work.
Posted by Brendan P. Myers at 10:48 AM