An extremely rare first edition of Edgar Allan Poe's "Tamerlane and Other Poems" published in Boston in 1827 was sold for $662,500 today at Christie's New York, a Christie's spokeswoman said.

There are only 12 known copies of the first edition. The book sold was one of only two copies still in private hands, Christie's said in a statement. The auctioneers had estimated the book would go for $500,000 to $700,000. The buyer's name wasn't disclosed." 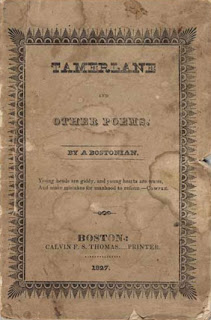 From "The Collector," available in Adamson's Rock and Other Stories:

"On the day in question, it was in the third box I'd gone through, buried beneath musty and worthless Masonic tomes and stacks of turn-of-the-century sheet music, that I found it. It took more than a moment to sink in. I could scarcely believe my eyes. I took in a sharp breath. My hands began to shake. I blinked hard before again opening my eyes for fear I was just imagining it. Still, there it was. Even an amateur collector like myself understood the scarcity and value of what lay before me.

It was a thin, softbound volume. A pamphlet, really. The front cover was stained and brown, the corners dog-eared. But even through the years of grime, still visible on its cover was the square-framed starburst with finials in each corner announcing to all the world the author had arrived! Alas, I knew the rest of the story. The world didn't care. Not then.

And so it was with trembling hand I reached down and slowly ran my fingers along the front cover. It read:

BY A BOSTONIAN
Even in my fugue state, my reverie, I smiled to think it might have been the last time the anonymous young author ever called himself that. A Bostonian, indeed! I knew about his ongoing battles with Boston's intellectual elite, Emerson and Longfellow and their ilk. I recalled he had been laughed out of the Athenaeum after a reading and not long afterward escaped Boston – his very birthplace! – and never looked back. But oh, the book. The book!"
Posted by Brendan P. Myers at 10:31 AM

The Raven in the Frog Pond:
Edgar Allan Poe and the City of Boston

Awesome to see Poe's Boston roots get more attention. Love the title of the exhibition as well.