Maybe, they too will come back

From the New York Times:

In the middle of tomorrow, a great ribbed ghost has emerged from a distant yesterday.

On Tuesday morning, workers excavating the site of the underground vehicle security center for the future World Trade Center hit a row of sturdy, upright wood timbers, regularly spaced, sticking out of a briny gray muck flecked with oyster shells. 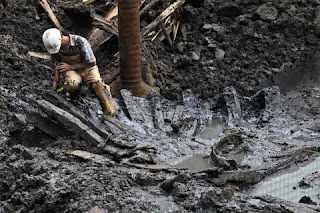 By Wednesday, the outlines made it plain: a 30-foot length of a wood-hulled vessel had been discovered about 20 to 30 feet below street level on the World Trade Center site, the first such large-scale archaeological find along the Manhattan waterfront since 1982, when an 18th-century cargo ship came to light at 175 Water Street.

Very cool stuff. Click the link above to read more and view a slideshow with more pictures.

In other news, fun with CreateSpace's Cover Creator: 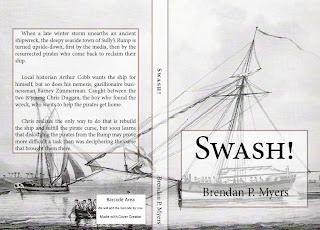 Queried ten agents, got two requests for fulls followed quickly by two polite passes. Between you and me, I think I'm done with all that. I simply can't take the rejection.

In excess of 200 rejections on now five novels seems to be my limit. Throw in another hundred or so for short stories, and well . . . isn't one definition of insanity doing the same thing over and over again and expecting different results?

Did get some good feedback from the first beta reader who finished it (thanks again, Steph!). Apparently, I've fallen into the habit of using "whatnot" and "and the like."

Funny, they're not expressions I use in my everyday life. Didn't at all realize I was doing it while writing, but I must have used it as shorthand, reminding myself to go back later and fill in those blanks.

Anyway, I'm at the point now thinking the book may be passable, but probably not all that great. Too bad. I think it's a great idea (pirates coming back to the modern world) that might have been good in more competent hands.

So, I'm probably gonna just go ahead and publish this on my own, learn whatever lessons there are to learn, and move on to the next thing. Substitute teacher, maybe. Or better yet, short-order cook.

A very cool cover. An an intriguing title!

Thanks, Barry. Appreciate it.