When I was fortunate enough to have my first story accepted to Northern Haunts, I began Googling to see what other writers and stories had been accepted. It didn't take me long to learn there was a community of aspiring writers out there just like myself, writing stories and plugging away.

Though it would be months before I'd set up my own blog, and later still before I had the courage to post at one of the other blogs, I noticed there was a great deal of cross-pollination going on among the writers I followed. They posted comments on each other's sites, congratulating them on acceptances and commiserating on rejections.

Links to many of the blogs I lurked can be found on the lower right-hand part of this blog, but there were lots of blogs I kept going back to that aren't, and one of those blogs belonged to a guy named Jamie Eyburg. He'd had a number of acceptances to markets I was trying to crack, and he'd also blog about his struggles as a writer and his love for his wife and two young children.

He'd also had a couple of stories selected for inclusion in a project called 52 Stitches, which I'd learn later is overseen and edited by the (I'd learn over time) how-does-he-find-the-time-to-do-everything-he-does Aaron Polson.

52 Stitches is a weekly dose of the macabre, conveniently available each week on its own website and at the end of the year made available in printed form.

I'm only telling you that to tell you this:

I'm pleased to report I've got a story titled "Milk of the Goddess" available in the newly published anthology 52 Stitches from Strange Publications and available now from Amazon.Com. 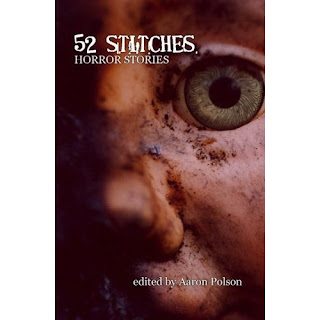 I'm even more pleased to note that after many long years, I'm finally sharing a Table of Contents not only with many of the writers I've since come to know, but also with Jamie Eyberg, who along with his wife died in a tragic accident a few short months ago.

All proceeds from the sale of this, what I understand will be the final edition of 52 Stitches, will go toward an alreadly existing fund for Jamie and Ann's two children.

And so, to my friends and family who are pretty much obligated to buy my stuff, buy this. That's an order. And to those visitors who've ever considered checking out some of my own work or that of the other writers I've long spoken of, this is the one you want.

Thanks, Aaron, for letting me be a small part of it.
Posted by Brendan P. Myers at 8:38 AM

Thank you Brendan, for sharing. I'm thankful to Stitches for all the writerly connections I've made.