I'm delighted to report that my friend Aaron Polson's novel "Loathsome, Dark and Deep" was released yesterday from Belfire Press and is now available on Amazon.com: 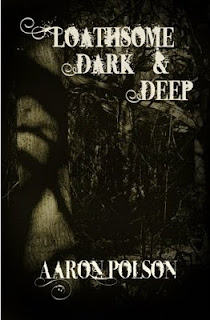 If you're not familiar with Aaron (and you should be, or most certainly will be) he is fast becoming a well-known and prolific master of dark horror, appearing in dozens of anthologies with some of the biggest names in the biz.

And If you don't keep up with Aaron's blog (and you should) you've missed lots of free fiction, tips for young writers, explorations of the writing craft, and resounding defenses of the short story form. There is no more eloquent champion of the short story than Aaron Polson.

However with "Loathsome," Aaron explores the longer form, which can't be good for the sleep of any of us:

"After months of silence from the H&P Lumber and Pulp logging camp, strange raving madmen have wandered out of the woods near the Lewis River. Civil War veteran Henry Barlow hasn’t carried a gun since his wife’s brutal murder, a memory he drowns nightly with bourbon and whiskey. When reports of the strange goings on at the Lewis River camp reach H&P, they send Barlow and a small band of armed mercenaries upriver to investigate. As the days pass and things get stranger, Barlow must confront the phantoms of his past, his alcoholism, and the dark hearts of men perverted by power and greed. Most of all, he must find a will to live in order for he and his team to get out of the woods alive."


And if the above description of the novel from Amazon (and the creepy trailer that follows) do not make you purchase a copy RIGHT NOW, either for yourself, or as a stocking stuffer for someone you love who's interested in dark fiction with a historical twist, then you and I have nothing in common.

Most sincere congratulations, Aaron! And best of luck.
Posted by Brendan P. Myers at 8:01 AM

I already ordered mine last week. Looking very forward to this one!

Awesome, Barry! And thanks for stopping by. Funny, while writing the post, I was thinking:

Thanks for the signal boost, Brendan.