Twenty-five years ago, a mindless act of teenage vandalism reawakened a long dead nightmare in the small Massachusetts town of Grantham. When a mutilated body is found by the side of the road, some in town realize that the horror of their youth has returned. They call upon their damaged friend Dugan, who has never forgiven himself for what happened back then and has lived ever since with the terrible consequences.

Delighted at first by the disappearance of the town bullies, Dugan and his outcast friends soon realize that as the undead begin to surround their own neighborhood, they must do battle against a growing vampire army led by the town's long dead Civil War hero. Along the way, they'll find clues in the diary of a young boy not unlike themselves, and strength in their own unique bonds of friendship.

"The Lost Boys meet Stand By Me" 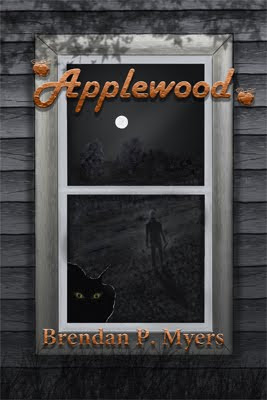 Applewood, a coming of age horror novel and vampire story, is available now in both Kindle and paperback versions from Amazon, Barnes and Noble.Com and your other favorite online retailers.

Read the first four chapters here.
Posted by Brendan P. Myers at 7:37 AM

Just ordered my copy! Do I get an author's autograph too?

Grateful too you bought one (I'll gladly pad the sales figures!) but rest assured, there is a copy with both your . . . and my . . . name on it. On my to do list was to have you send me your address, so send it already! For their service too, Dan and Eric will also each be getting their own.

So use this one as your reading copy, and you can tuck away the one I send you in the hopes it becomes valuable ebay fodder someday! A man can dream, can't he?