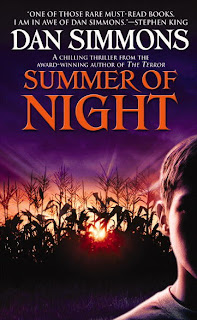 In Dan Simmons’ Summer of Night, an ancient and forgotten evil comes to life in the small town of Elm Haven, Illinois, where a close-knit group of recently graduated sixth graders are among the few to realize it’s happening, and soon understand they are the only ones who can deal with it.

Though a terrific work of horror, Summer of Night is much more than that. It’s a coming-of-age tale that deftly recalls what it’s like to be eleven-years-old, no longer a kid, but yet not truly adolescent either. It affectionately captures hot, sweaty summer days of riding bikes, playing sandlot baseball, camping out, long days spent in the woods, and a nascent and budding interest in the opposite sex.

It also quite cleverly captures a time, the year 1960, with black and white background images of Democrats nominating Kennedy and the first satellites being sent into space; and a place, the dying town of Elm Haven, Illinois, which doesn’t know that it’s dying.

The source of the horror both stretches credulity and is quite clever. Then again, it doesn’t matter what causes the World War I soldier to come out of his grave and stalk one of the character’s grandmothers. It doesn’t matter how the lamprey creatures can burrow and surface and dive into asphalt as easily as a dolphin in water. And it certainly doesn’t matter what caused the interior of Old Central School to become ensconced in viscous fluids, pulsing eggsacks, and fleshy tentacles. What matters is it has happened, and must be dealt with.

One of the things I find interesting about reading an obviously semi-autobiographical coming-of-age tale is trying to determine exactly which character is the author. In this book, there are many to choose from. There’s altar boy and all-around good guy Mike O’Rourke, earnest Dale Stewart and his younger brother Lawrence. There’s wiseass Jim Harlen, and quietly strong Kevin Grumbacher. And in the background, hovering over them all, is the bookish and brilliant (and doomed) Duane McBride.

Though it becomes obvious toward the end which character most resembles Simmons, I’m struck upon every re-reading just how fully drawn each of the characters is, and can’t help but think there’s a little bit of Simmons in all of them.

What strikes me most upon each re-reading of this book is the universality of it. Though I wasn’t born at the time this book takes place, it captures my own perhaps romanticized memories of my youth, hot summer days playing baseball and hanging out with friends, of riding bikes and camping out and playing in the woods. That may be why I re-read this book every few years or so.

It’s always good to catch up with old friends.
Posted by Brendan P. Myers at 11:38 AM

I'm loving that Summer of Night cover. I'd pick it up if I saw it at my local bookstore.

You got that right, Ray. One of the things I didn't mention was just how well Simmons captured the sheer . . . claustrophobia of the growing wheat, seeming to cut off the town. The cover truly captures that.

Shout out to cover designer Diane Luger, cover illustrator Tom Hallman, typographer Ron Zinn, and Warner Books for having the presence of mind to credit them in the book!