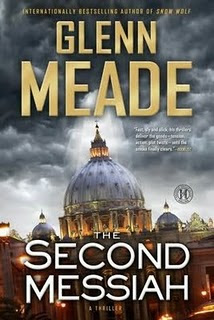 I wonder if it’s getting harder to write biblical thrillers. I mean, think about it. The Ark of the Covenant is safely lost in a government warehouse. The Robe Jesus wore was won in a dice game. And the Holy Grail wasn’t a grail at all, it was something called “the sacred feminine” . . . or some such thing.

Undaunted by all that, into the fray comes Glenn Meade, with his new novel The Second Messiah.

Our story begins with the discovery of an ancient scroll, near Qumran in Israel, where the Dead Sea scrolls were found forty years before. Shocked by the revelation contained within, on his way to share his discovery with the world, the discoverer and his wife are killed in a car wreck. Happening upon the scene is a young Catholic priest, who manages to salvage the scroll from the burning vehicle, only to have it disappear forever behind the walls of the Vatican.

Twenty years later, the son of that discoverer, following in his father’s archaeological footsteps, makes a similar discovery, a scroll very much like the one his father found. But even he doesn’t have it more than a few hours before history starts repeating itself, people turn up dead, and the scroll goes missing.

On a simultaneous track is the election of a new pope, an American who promises to open up the Catholic Church by revealing all her ancient secrets. Needless to say, there is an old guard within the Vatican that doesn’t think that’s a good idea at all. The new pontiff, who is haunted by something in his past, will not be dissuaded. By then, we readers know that the new pope might very well be the same man who rescued the scroll from the car wreck twenty years before.

Now if all that sounds a bit of a mess, it might be. But it’s a delightful mess, one you need to get through before the real action begins, that takes our somewhat bloodless hero on a journey through the deserts of Jordan, beneath the ancient streets of Rome, and into the rarefied sanctuary of the Vatican’s secret vaults.

Of course, the payoff to any story of this type is what exactly is the SHOCKING REVELATION! contained within the scroll, one that would ostensibly crack the foundations of Christianity and cause otherwise good men to kill? Meade does a good job keeping that under wraps for a few hundred pages or so.

And though I won’t tell you what it is, I was impressed by both its simplicity and believability. Perhaps the highest praise I can give is to say that when I read it, I said to myself, “You know what? That – or something quite similar – probably did happen.”

The book is written in very short chapters, most every one a cliffhanger. As previously noted, lots of information is crammed within the first few chapters. But my advice is to just go with it. It pays off in the end.

Another thing that struck me is how squeaky clean it is, with nary a D-word or an F-bomb in sight. I suspect that’s done purposefully, with a specific audience in mind, however I’m not sure it’s the way gritty men on archaeological digs actually talk.

In a similar vein, our hero is surrounded throughout by beautiful women, two of whom have obviously fallen in love with him, yet he remains single-minded in his quest. Not sure how believable that is either. In fact, I was about to give up hope for him until the last few pages, when he finally shows an emotion other than bitterness at his parents' deaths. Score one for Jack!