I'm pleased to announce that "Fledge," the next volume in the "Applewood" series is now available in Kindle format from Amazon.Com, and coming soon in paperback and other e-reader editions. Buy it. Read it. Like it on Facebook! And tell your friends!

Fourteen-year-old Scott Dugan is both desperate survivor and hunted casualty of a vampire outbreak that decimates his small Massachusetts town. His uncle believes science offers hope and takes the boy on the run from shadowy forces tasked with exterminating those like his nephew.

But when the two separate, Scott embarks on an epic journey that takes him from cheap carnival sideshow act to comfortable refugee in the home of a wealthy and reclusive man with his own dark tale to tell.

As the chase moves from the low deserts of Arizona to the high peaks of Colorado and into the White House itself, Scott must avoid becoming a pawn in someone else's deadly game.

And when he learns that self-discovery for those like him is found only by embracing all he has become, he must weigh his longing to remember who he was and where he came from against the certainty that in doing so, he will never see the sun again. 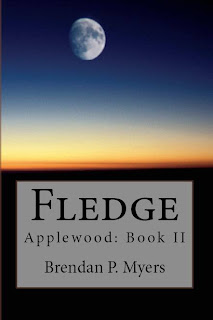 As always, thanks for reading!
Posted by Brendan P. Myers at 11:27 AM