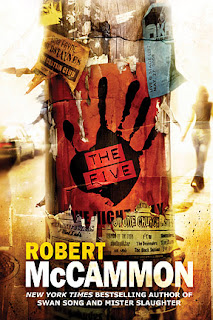 The Five are an Austin-based rock and roll band on the “knife and gun” circuit that takes them from city to city, playing boxlike structures that now all look the same, to drunk and unruly crowds. All five have been in the business a while, playing in dozens and dozens of bands before finding each other.

But after years of looking for their big break, of driving their van (affectionately known as the Scumbucket) throughout the southwest, of setting up MySpace pages and selling T-shirts and CDs at the back of the room, a couple of band members are tired and want out. This doesn’t sit well with John Charles, AKA Nomad, the volatile and often angry tacit leader of the group.

Still, he can’t really blame them, wondering himself just how long he can chase the dream before either giving up or checking out. But he has hope that their new song and video, an anti-war anthem called "When The Storm Breaks," might be the thing to put them on the map. On a swing through Texas, the band stops and does an interview with a sleazy car salesman who also has a music-based late night cable show.

Unfortunately, when the show runs and plays their video, showing American soldiers fighting in Iraq, it is seen by a drifting-toward-psychosis Iraqi war veteran, who becomes more than offended by what he thinks he sees in the interview and finds himself with a new calling: Killing The Five. All of them.

I'll confess while reading it and learning that an Iraqi war veteran was going to be "the bad guy" that my toes curled a little, wondering a) if that didn't border on cliche, and b) wondering if even I (a pretty anti-war guy) might be offended by it. I should have known better. McCammon does his usual excellent job in humanizing even someone engaging in horrific acts, and somehow giving him his own quiet dignity.

But I think the chase that comes afterward, the supernatural girl in the field, the story of Stone Church, the insertion of the FBI, all of that is simply a mechanism to delve into what the book is really about: music, the love of music, the sometimes heroic things people go through to write and perform music, and the transcendence -- the magic -- that can sometimes occur during live performances when musicians and audience become one.

I’ve heard too that this book has been on the shelf for a while, that McCammon had a difficult time finding a publisher for it. After reading it, I can’t say I’m surprised, for The Five is truly a "novel" in that it’s novel; something new and different and hard to categorize.

In fact, there’s a scene in the book where The Five face the corporate suits in the music industry, who only understand dollars and cents and not the music. In my imagination, McCammon himself faced some of those same people when trying to get this published, people who didn’t understand what they had, who didn’t smell the sweat coming off every page, people who didn’t hear the music contained in this book.

For what The Five really is, is a rollicking rock opera, and a stupendous achievement.
Posted by Brendan P. Myers at 11:05 AM