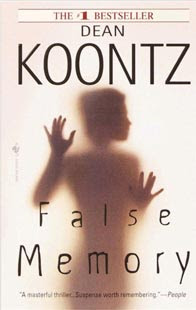 So I’m not quite halfway through this book and still don’t know what to make of it. Yes, I’ve been on a bit of a Dean Koontz tear lately, and have enjoyed greatly the last few novels of his I’ve caught up on. Maybe I’m Koontzed out. But I think there’s more to it.

The book itself begins slowly, but before too long you understand it has to do with hypnosis, and an evil doctor who uses his patients as playthings in some kind of gruesome game. I confess as well to being absolutely turned off by the realistic sadism revealed in parts of the book.

However, I think the major problem with the book is that it’s overwritten. Not overwritten like so many authors do, to pump up the word count, making lists of things, items, objects, substances, to enhance the situations, affairs, and concepts, that the writer is talking about . . . you know what I mean. Though there is plenty of that in this book.

“Who would have programmed Skeet? When? How? Where? For what possible purpose? And why Skeet of all people: self-admitted feeb, druggie, sweet loser that he was?”

Fascinating he was able to get the entirety of the newspaperman’s credo (who, what, where, when, and why?) into that passage (and don’t think I didn’t notice it took three adjectives to describe Skeet.) But it was the next sentence that sealed it for me:

“The whole thing smelled-smacked-reeked of paranoia.”

Ya know, as someone who has tried his hand at fiction, who often has trouble finding enough words and plot points to flesh out an entire novel (generally thought of as 50,000 words or more) I never even thought of not selecting the most precise word for what I mean to say, but simply using all of them and letting the chips fall where they may.

As noted previously, it might just be that I’m Koontzed out. Nevertheless, I’m going to move on from this book and on to something else. I only hope I can return to both this book and to Koontz someday, and not suffer for having (perhaps) glimpsed the wizard behind the curtain.
Posted by Brendan P. Myers at 3:51 PM