(In celebration of International Talk Like a Pirate Day, here's another excerpt from Swash!, my novel of eighteenth-century pirates let loose in the modern world:)

* * *
The small sloop began harassing the tall ships just a few miles outside of Boston. In an egregious affront to the agreed upon sailing order of the day, it tacked to and fro between and among the larger vessels with abandon. The skipper of a Portuguese brigantine who thought she came far too close attempted to raise her on the radio, to no avail. The captain of a French schooner simply shrugged and gave her the right of way, while sailors on a grand four-masted Argentine barque cheered their misbehavior and spurred her on. The smaller sloop managed to overtake most all the larger vessels, and with what some might call daring and others would call merely foolhardy, she screamed into Boston Harbor under a full head of sail.

Paying no attention to the larger vessels, she sailed straight toward that icon of the Boston waterfront, Long Wharf, where a sea of crowds stood watching the parade from just outside the famed Boston Harbor Hotel. Some of the more nervous types in the crowd, seeing a ship under full sail showing no sign of slowing down, began to slowly shrink away from what to them was obviously a looming disaster. Others stood their ground and raised their cellphone cameras, to record what was obviously a looming disaster. With any luck, if they survived it, they could have the video on the Internet in seconds.

And still, she kept coming. Some thought she picked up speed the closer she came. A panic broke out among those nearest the water as the ship began filling their horizon. The panic grew such that no one in the crowd — not even those filming it — stopped to note a familiar black flag with skull and crossbones waving proudly on her yardarm. Closer and closer she came, close enough that some on shore would later swear they saw a kid on deck wearing an Alf T-shirt (though later magnification of the video proved inconclusive.) Suddenly, just as it appeared the ship couldn’t help but slam full-speed into the wharf, a shouted order came from her deck and the ship swerved hard to port, sending huge plumes of water into the crowd.

She seemed to hang there a moment, an eerie ghost ship with, of all things, a dog barking excitedly on its deck. And then . . . her boom swung the other way, and wind again filled her sails. She was propelled parallel to the shore a moment before tacking hard back out to sea, picking up speed as she went. The stunned and now wet crowd went silent a moment, before someone started applauding. Moments later, a rousing cheer rose up. Whatever that was, it hadn’t been listed in their twenty-dollar programs, and anyway, the water was cooling. The crowd continued to watch as the ship sailed away, paying no attention to the huge Russian barque that was next on the program. And some of those watching had a feeling that whatever this little ship was up to, its next destination could only be the nearby party boat, the Sojourner. It was headed straight for her.

* * *
Sojourner was doing a lazy ten knots along the south side of the harbor, sailing past Jimmy’s Harborside Restaurant, when the first mate spotted something.

“Vessel approaching from the port side, Captain,” he said. “Fast.”

He handed his captain the binoculars. After peering through them, the captain smiled.

From their own bridge, they’d all watched the spunky little ship scream into the harbor, then put on a little show for the crowd down on Long Wharf. The captain marveled at the seamanship, remembering doing the same in his younger days in the navy. While it was going on, his humorless first mate began to say something about it being outrageous. One look from the captain put a stop to all that.

After asking himself again just what the hell he was doing piloting a three-star restaurant around the harbor, the captain ordered, “All engines stop.”

The first mate raised his eyebrows. “But Captain . . .” he began, stopping when the captain gave him another cold look. He bit his tongue again, thinking that sometimes, it seemed as if the captain didn’t like his job very much. But then, surprisingly, the captain smiled.

Handing his first mate the binoculars, the captain said, “Have a closer look.” While his mate was doing that, the captain addressed the bridge.

“It would seem, gentlemen, that our client has arranged some sort of entertainment we were not informed about. It happens sometimes.” He waited for the first mate to lower the binoculars before going on. “Unless, of course, you believe we’re about to be attacked by pirates.”

He waited a beat before turning to his first mate and asking, “Do you believe we’re about to be attacked by pirates?”

The look on the captain’s face revealed there was only one correct answer to that question. 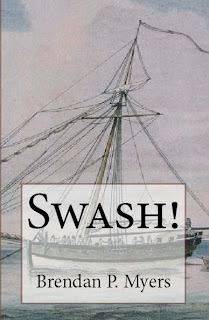